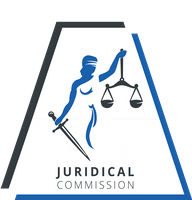 The Juridical Commission of AEGEE-Europe is one of the four commissions of AEGEE. Its main tasks and its composition are described in the CIA (Article 28 of the Statutes).

At least three nationalities have to be represented in the Juridical Commission. The President of the Juridical Commission will be the member elected by the Agora having the largest number of votes. The three members elected by the Spring Agora are in charge for the period starting the 1st of August and finishing on the 31st of July the following year. They can be re-elected.

Additionally the following other tasks are found in the CIA:

The JC can appoint subcommissioners (subcommies). They are elected through internal procedure.